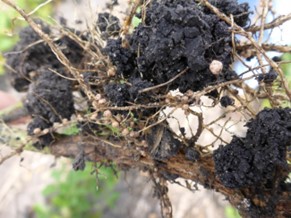 North Dakota has the highest incidence rates reported for soybean cyst nematode (Heterodera glycines) in the United States (Tylka and Marett, 2017). The stakes are high to control the soybean cyst nematode (SCN) as yield losses are estimated around $1 billion annually (Moens et al., 2018; Wrather et al., 2001). The continued spread of SCN across the Midwest and diminishing genetic resistance in soybeans has fueled renewed fervor for national awareness, through the 2nd SCN coalition, which calls for greater use and availability of diagnostic testing for proactive management. Importantly, SCN is not a specialist, as its name might suggest, but can infect many other food and cover crops (Niblack and Tylka, 2010; Poromarto et al., 2015; Venkatesh et al., 2017), including all market classes of the edible bean (Phaseolus vulgaris L.). Research continues to focus on the SCN issues for soybeans, which overshadows the eminent risk of SCN in edible beans. Consequently, the distribution of SCN in North Dakota exists within the heart of the most productive edible bean areas of the nation (http://www.nass.usda.gov). Current management decisions for SCN rely on traditional tests that require microscopes to visually identify and count eggs in post-harvest soil (Niblack and Tylka, 2010; Markell et al., 2016). To continue to make progress towards effective SCN management, more sensitive and advanced nematode diagnostic tests must become available to all growers, especially those producing specialty crops.

Sugar beet cyst nematode (SBCN) is a parasitic worm that can cause significant reductions in yield. It was first reported in Utah in 1985 and can be found in all sugar beet-producing areas, with the exceptions being Minnesota and eastern North Dakota. Growers and producers need to be able to identify signs and symptoms to prevent the spread into Minnesota and eastern North Dakota. Development of a molecular assay to identify SBCN can aid in stopping the spread by detection before symptoms are even apparent (Khan et al., 2021).

This project was funded by the North Dakota Department of Agriculture Specialty Crop Block Grant.